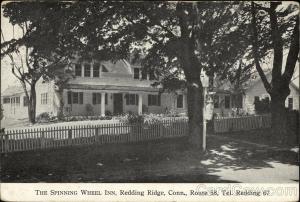 Today, the house on Route 58 (Black Rock Tpke) in Redding CT, where my fourth great grandfather Bradley Burr once lived, is The Spinning Wheel, a popular restaurant.

Bradley Burr was born in nearby Weston in 1794.  His father, John, died at sea when Bradley was ten.  On Dec. 20, 1820, he married Sallie Wheeler (1804-1860), of Easton, at the Redding Congregational Church.  They had eight children, including my third-great grandmother Julia Burr.  Burr was later active in the Methodist Church in Redding.

Burr bought the property on Route 58 and lived in the white house with black shutters for many years. Burr had his hand in several businesses. The 1850 census lists him as a farmer. In 1860, at age 64, Burr is listed as a mail deliverer. Earlier censuses do not list an occupation, but do note that he has a black servant. According to some reports, the house was a stagecoach stop. Burr drove a four-horse stagecoach and delivered mail and merchandise between Danbury and Norwalk three times a week.  He also ran a boot and shoe business, possibly. 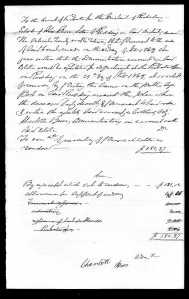 Burr died at age 74 in 1868 and is buried in the Redding Ridge Cemetery in Redding. His will, which shows that he owned several properties, is now accessible on ancestry.com.

In 1925, the house was bought by Elaine Tottle, who opened a restaurant, the Spinning House Inn, which was  popular for locals and travelers. (See the map below). For a long time, a painting of Bradley Burr hung on the wall. In 1948, there was a fire and substantial renovation.  The inn eventually closed but reopened in the past several years with a new owners and new renovation. Business looks good and the Spinning Wheel is on my itinerary for my next trip to Connecticut.

This entry was posted in Uncategorized. Bookmark the permalink.